I came across this problem last week. Here’s a table containing contact data:

Yes, I’m already using SQL Server 2008 R2 but I was able to reproduce the behavior described below also with SQL Server 2008. The script above will insert 18,508 rows into our table.

Given this table, what do you think about index utilization of the following ad hoc statement:

The SELECT statement returns 0 rows and the optimizer is able to find out this by using the nonclustered index on the city column. The execution plan proves it:

Inside the SP the same statement as before is executed. Also, the procedure is created with the RECOMPILE option, to ensure a fresh execution plan is generated for every execution of the SP. Let’s say, we like it to be this way, since we expect very different parameter values will be provided which in turn will create result sets of very different cardinality.

But surprisingly, the execution plan reveals a clustered index seek this time which is far from optimal! Look at this:

Although the plan shows a Clustered Index Seek, this seek actually is a scan, because of the provided search argument “%nobody%”. (See here for more information.) Therefore, all leaf level pages of the clustered index have to be scanned, and this takes 1,065 reads. That’s about than 300 times more then it was with the ad hoc query!

Strange. I wasn’t expecting this. Due to parameter sniffing, the procedure’s plan should be adjusted to the parameter values provided. This statement should be even more valid, since the procedure was created by specifying the RECOMPILE option. But parameter sniffing seems not to work in this case. As I don’t know why, and I also consider this behavior totally unexpected and kind of wrong, I’ve created a bug for this on MSFT’s connect platform. You can vote for it here.

Making a column value in all rows identical

Assume we have the following table:

Table t1 has 10,000 rows and also 10,000 pages at the leaf level of the clustered index (one row per page, since I’ve added the filler column which is 8,000 bytes wide). I’ve decided creating the test table like this (one row per page), since it eases further calculations.

I was using a table similar to this, when collecting data during the day that had to be processed in a nightly batch job. To distinguish between new arrived rows and already processed ones, the status column is used. Let’s just say, we use a status value of 1 to mark rows that have been processed and that a value of 0 is flagging all rows that are ready to be processed. So, at the moment there are 10,000 rows in total, where 100 rows (with status=0) are waiting to be handled.

So let’s say, all rows could be handled successfully and no new rows will be arriving during the nightly batch. What’s the difference than between the following two statements:

Logically, there’s no difference. Both statements will set the value of the status column to 1 for all existing rows. But we have only 100 rows with status != 1 in place, so will there be any noticeable difference in the number of writes and the amount of dirty pages in the buffer cache after executing each of the two UPDATE statements? Is SQL Server smart enough to detect that only 100 rows are affected (that is also 100 pages in our case) for both queries, or is the update without a predicate really touching all rows/pages?

Well, let’ see. For each of the following experiments I have repeated the creation of the test table before executing one of the two UPDATE statements. Additionally, I have performed the following script right before starting the UPDATE:

This is to make sure that all modified pages have been written to disk before examining the number of dirty pages that our UPDATE will create.

For examining the performed number of writes, I queried the column last_logical_writes of the DMV sys.dm_exec_query_stats. The number of dirty pages after each UPDATE was simply obtained by utilizing the DBA’s all purpose tool DBCC. DBCC MEMORYSTATUS reveals a regarding section (almost at the end) containing buffer pool information which looks like this: 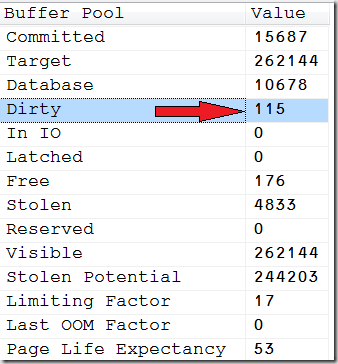 We start with the first statement, containing the predicate WHERE status != 1. I expect to see only 100 pages been written (100 logical writes) and almost the same amount of dirty pages (may be some more, since the value obtained by DBCC MEMORYSTATUS is server-wide).

Ok, the numbers are as expected. My experiment shows 100 logical writes and 115 dirty pages. Nor surprise here.

My second experiment uses statement 2 (that one without a predicate). This time, the result is surprising. Again the UPDATE shows 100 logical writes and a similar amount of dirty pages (135). That’s really amazing, isn’t it? SQL Server is smart enough to write only modified data and not touches unchanged rows, even if we, let’s say, forget the predicate. I didn’t expect this result.

Including the OUTPUT clause

What will happen if we incorporate an OUTPUT clause into our UPDATE statements? Via the OUTPUT clause I do have access to all modified data by using the virtual DELETED and INSERTED tables. Actually, two questions arise, when not specifying the predicate WHERE status != 1:

I’d say, this is as expected.

For the next experiments, I’ve also created an UPDATE TRIGGER like this:

The trigger doesn’t do anything particularly useful, but let’s see if its only existence changes something.

With the trigger in place, the number of writes and also the amount of dirty pages increase dramatically, if no predicate is specified (so all rows are affected by the UPDATE). In this case I’ve observed number of writes as well as the total of dirty pages are both around 40,000! That’s about 400 times higher than without a trigger. So, the next CHECKPOINT has to write out about 40,000 pages this time, instead of only around 100 before. Big change!

I think, the reason for this specific behavior lies in the pure existence of the virtual tables INSERTED and DELETED inside the trigger. The trigger is fired after the update has been performed, and these two virtual tables have to contain all tables’ rows, when no predicate is specified. It seems, SQL Server has to modify rows in order to have them included in INSERTED and DELETED tables.

I could also observe reads from tempdb, when the trigger is present. That’s as expected, since INSERTED and DELETED tables are hosted inside tempdb.

Somewhat strange, since the behavior for the OUTPUT clause is different, although both cases (OUTPUT and TRIGGER) are pretty similar.

So, despite the trigger does nothing, it is affecting query performance and resource utilization! Not because of the trigger’s code, but simply because of its pure existence. Just one more reason to be careful with triggers!

You probably read already something about caveats and catches when relying on implicit type conversation. Here’s another one regarding the plan cache.

Whenever an execution plan is compiled, SQL Server will try to store this plan in the plan cache. That’s because plan compilations are quite expensive in respect of CPU usage and therefore should be minimized. But sometimes this process doesn’t work as expected. Have a look at the following example.

First, we clear the plan cache

and see what’s in the plan cache by invoking this query:

Ok, no surprise. There’s a cached plan with a usage count of 1. This is as expected.

I expected the cached plan was reused. But surprisingly not! Let’s see what the plan cache reveals now. It looks like this:

As we asked for backup_set_id=1000 this time, our parameter is implicitly converted into a SMALLINT, since SMALLINT is the smallest possible data type a value of 1000 fits into. Consequently a new plan is generated and cached.

We can repeat our experiment with a predicate of WHERE backup_set_id=10 and see another plan is going into the plan cache:

So, we have three plans now, all with an execution count of 1!

As for me, I think this behavior is somewhat strange. The column backupset_id is of type INT, so why not just create one plan with INT as parameter type and stick to this plan?

Since implicit type conversation is the root of our problem, we may solve it by avoiding this implicit conversation and cast explicit. We can re-write our queries like this:

After doing so, there’s only one plan in the cache. But I suppose, you wouldn’t want to introduce those explicit casts to all of your queries. It’s not very readable and looks like bad programming style, doesn’t it?

Another solution comes through sp_executesql:

sp_executesql expects parameter declarations and, therefore, no implicit type conversation is involved this time. We see only one cached plan with an execution count of 3, when all of the above three queries have been executed.

Posted by Holger Schmeling at 10:42 AM 0 comments

You probably already know that string comparison is dependent on the collation. But sometimes this dependency is slightly strange…

I have installed an SQL Server with LATIN1_GENERAL_CI_AS as default collation (like is also the default setting during installation). Some weeks ago I came across a specific behavior in combination of this collation and the German language.

German is a beautiful language! Really. You may know that we Germans have some special vowels (the “Umlaut”: ä, ö, and ü) and also that extra ß which is often (but not always) simply interchangeable with “ss”. Look at this query that uses the default collation for comparison:

Considering that LATIN1_GENERAL_CI_AS is the default collation, the query above is identical to the following query:

In both cases the result is Yes, so “ß” is considered as to be identical to “ss” when using the LATIN1_GENERAL_CI_AS collation.

Hmm. Now look at this query:

This time the answer is No which is somewhat surprising, since one could consider the overall behavior inconsistent. In German, “ä” and “ae” (and also “ö” and “oe” as well as “ü” and “ue”) are just as interchangeable as “ß” and “ss”.

When this happened to me, I started browsing books online. There’s a hint, where you are advised setting the default collation to LATIN1_GENERAL_BIN for new installations. I didn’t know this so far, but ok: let’s retry our experiment:

Now the answer is No.

But considering the fact that most newer installations use LATIN1_GENERAL_CI_AS, simply because that’s the default during installation, I can’t just change the collation to LATIN1_GENERAL_BIN, since this will certainly create other problems with queries spanning multiple databases with different collations. Not taking into account that changing the collation for an existing server and all of its databases/columns is a cumbersome and also very risky task on its own…

Posted by Holger Schmeling at 11:18 AM 0 comments